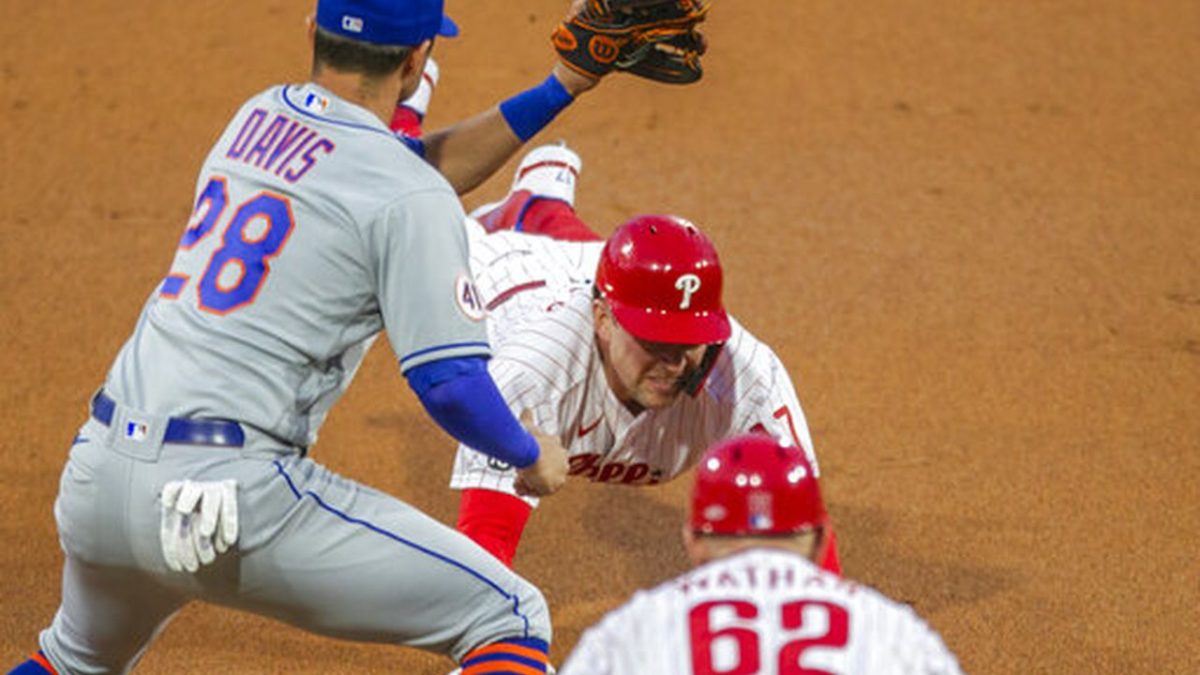 The Phillies and Mets wrap up their three-game series today in Queens. Philly hopes to be the first MLB team to take a series against New York.

Today, the Phillies and Mets will play the rubber match of their weekend series at Citi Field in New York. Yesterday Philadelphia was able to bounce back after being no-hit by the Mets on Friday. Five pitchers combined for New York to get the 3-0 victory.

The Phillies won yesterday’s contest 4-1 as James Norwood picked up his first victory out of the bullpen to even up the series.

Philadelphia had won four straight games coming into this series before being shut out in the first game vs. New York. Both teams are 7-4 in their last 11 games overall, with the Phillies now at .500 with an 11-11 record after starting the season 4-8.

The Mets lead Miami by two games in the NL East, with Philly now sitting four games out of first place after yesterday’s win.

Phillies Look to Go Above .500

Philadelphia recovered in yesterday’s game to get a victory and even up the series. They now look to go above the .500 mark for the first time this season with a second straight win this afternoon.

Nick Castellanos leads the Phillies, batting .300 with 24 hits, and Kyle Schwarber leads the team in home runs with five but has been otherwise struggling at the plate with a .169 average and just 12 hits.

The Phillies expected better from their pitching staff as they have struggled with a 3.89 ERA. Kyle Gibson leads Philadelphia starters with two wins and a 2.93 ERA.

Aaron Nola leads the team in strikeouts with 34, and Corey Knebel is the team leader in saves with four and has the best ERA on the staff at 0.96 in nine appearances out of the bullpen.

The Mets had won eight of ten games before losing to the Cardinals on Wednesday when they gave up a season-high ten runs.

However, they have a good chance to get back into the win column with their ace Max Scherzer getting the start on Sunday. He’s 3-0 with a 1.80 ERA, which is 13th in the league. He’s also ranked sixth in WHIP at 0.76.

As a team, the Mets are tenth in runs scored per game and are second in batting average at .255. Francisco Lindor and Pete Alonso are tied for tenth in the NL in home runs with four apiece. Alonso is also tied for fifth in the league in RBIs with 17, and Starling Marte is close behind with 15.

The Phillies are 8-4 in their last 12 games against the Mets, and the total has gone under in five of their last six games on the road vs. New York.

The Mets are 10-4 straight up in their previous 14 home games, and the total has gone under in nine of their last 12 games against the Phillies.

The Mets are slight favorites as their ace takes the mound on Sunday. The Phillies haven’t had much success against the right-hander, as Scherzer is 15-4 in his career against them with a 2.47 ERA in 26 starts.

Unless they can figure out how to score more runs against him, Philadelphia looks to be in for a long afternoon.