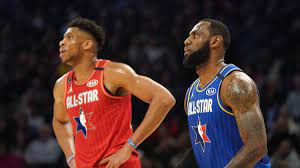 It’s that time of the year, and the NBA is back with its 2022 edition of the All-Star Game. This year fans voted for the two team captains who have recently set the pace and chosen their roster to feature at this year’s All-Star showdown. Los Angeles Lakers star LeBron James is featured as one of the men to look for on the basketball court.

On the other side, Brooklyn Nets’ Kevin Durant will lead the rival roster that will face LeBron’s picks. The All-Star weekend showdown will kick off tonight with the NBA All-Star Celebrity Game, followed by the NBA Rising Stars Challenge.

Last year’s All-Star showdown featured both James and Durant as team captains. After a close game, team LeBron won over KD’s lineup by a 170-150 score. LeBron might just have the right combination of players to pull another top performance this year.

The starting lineup is completed by Chicago Bulls guard DeMar DeRozan and Denver Nuggets forward Nikola Jokic. The reserve squad is led by the Suns’ Chris Paul and the Philadelphia 76ers’ James Harden.

The remainder of the reserves is the Dallas Mavericks’ Luka Doncic, the Cleveland Cavaliers’ Darius Garland, the Miami Heat’s Jimmy Butler, the Utah Jazz’s Donovan Mitchell, and the Toronto Raptors’ Fred VanVleet.

Durant’s picks are nothing short of what players could have expected for this year’s All-Star game. But, instead, Durant made sure to wisely pick the right handful of stars to avoid a second consecutive defeat this year.

With a recent desire to not let go of another chance to pull a solid win, Durant’s lineup might be all set to take over LeBron’s picks for this year’s All-Star matchup.

LeBron’s lineup seems to be stronger than KD’s top men. With last year’s MVP on their side and some of the top scorers from each team in the league, LeBron has made sure to pick a proper All-Star lineup.

As for Durant and his leading men, Embiid and Tatum might stand as the two of the top players to watch. This is Durant’s first chance not to let James come away with another All-Star win.