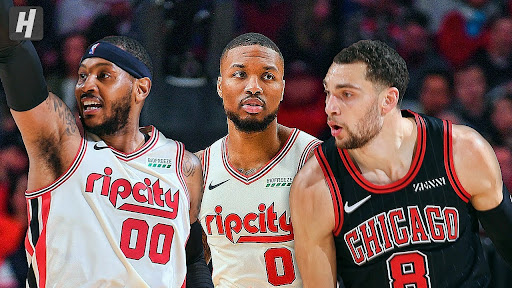 The next chapter in the NBA for the improved Bulls season run is at stake when they play on the road against the Blazers. Portland now has a shot at taking all of their incredible moments and converting them into a comeback for the troubled season that they have had so far. Both teams are coming off a win and are highly motivated to use this game to keep things going.

The Blazers recently scored a win against the Toronto Raptors, and the Bulls are coming off a great win against one of the top contenders for the title, the LA Lakers. Even when they are in very different positions currently on their divisions, this matchup has a lot of expectations when they find each other on the court. PG Damian Lillard is known for killing teams’ momentum and is leading with the assists averaging 8.1 per game, while SF Demar Derozan has given the Bulls some airs of greatness, averaging 26.9 points per game.

Chicago Bulls By The Horns

The Bulls have shown flashbacks of their past glories during the season, and it has been the first time in decades that the city of Chicago is back to being in the conversation for the next title shot. With his new team, DeRozan has been an overwhelming threat to their opponents, currently averaging 26.9 points per game with a 51% percent from the field goal. The Bulls’ rising star has had a great collaboration with the recently-acquired PG Lonzo Ball, who is leading with 4.6 assists per game.

The Bulls have accumulated wins against some of the biggest teams in the league, such as the Brooklyn Nets, LA Clippers, Lakers, Dallas Mavericks, and the Utah Jazz. Surprisingly for most, Chicago has become the revelation team so far this season. It is looking to continue to make statement wins all along to prove themselves in the postseason.

When we talk about the Blazers, it is inevitable to talk about two of their most iconic players in SG CJ McCollum, averaging 21.3 points per game, and PG Damian Lillard, who is making 8.1 assists in the number-five spot across the league. Portland currently holds a record of 7-8, placing third in the Northwest Division below such teams as the Denver Nuggets and the Utah Jazz, and now is looking to start to turn the needle to the other side.

A win against the Chicago Bulls would mean a great step forward to do exactly just that. It is always worth mentioning that the “Dame Time” is as real as any other legend or myth on the court that has ever been told. That will play a key factor when they face each other on the court Wednesday night.

The Bulls have had a lot of issues playing the Blazers in recent history; they are 1-8 in their last nine games playing each other, but this has not been just for this matchup since the city of Chicago has been struggling for quite some time all ready to get back into a competitive status. For this season, though, the Bulls have demonstrated to be a high-caliber team and have recorded 4-1 in their last five games overall and 5-2 in their previous seven games on the road.

The Chicago Bulls will take the win on the road as they have beaten tougher teams playing as a visitor just recently. They have shown that they can face hard courts such as Portland in their next game and should not be a problem for this powerhouse most improved Bulls that is taking the entire league for a spin.