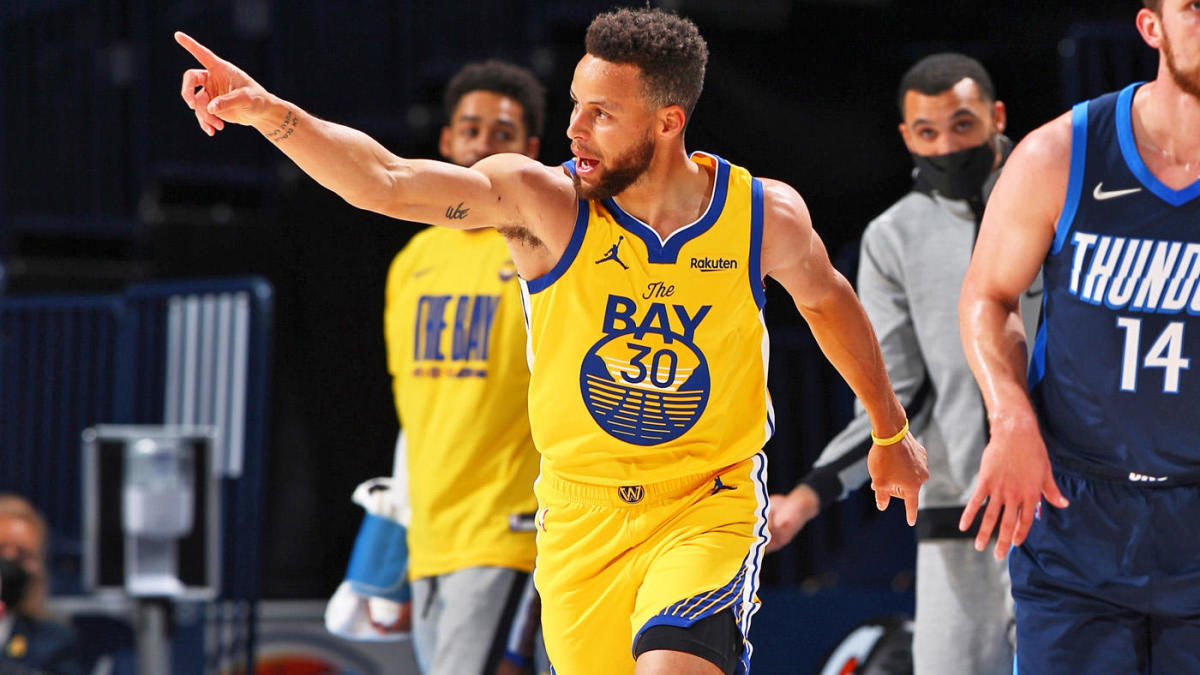 OKLAHOMA CITY, OK - APRIL 14: Stephen Curry #30 of the Golden State Warriors celebrates during the game /aOklahoma City Thunder on April 14, 2021 at Chesapeake Energy Arena in Oklahoma City, Oklahoma. NOTE TO USER: User expressly acknowledges and agrees that, by downloading and or using this photograph, User is consenting to the terms and conditions of the Getty Images License Agreement. Mandatory Copyright Notice: Copyright 2021 NBAE (Photo by Zach Beeker/NBAE via Getty Images)

The Golden State Warriors have won two straight games since coming up short against the Nuggets last week in the first of a home-and-home series. They were able to get some extra rest as the second game of the series was postponed. The last two victories have been against the Jazz in Utah, 123-116, and Miami by a score of 115-108.

Dallas has won three straight and moved above .500 for the season after their 103-89 win over the Denver Nuggets on Monday night. They look to stop the Mavs in their tracks tonight.

With the Phoenix Suns only a half-game behind the Warriors in the Pacific Division standings, the team needs to run off some wins to put some distance between themselves and the second place Suns. This will be their first matchup of the season against Dallas, who are 16-10 against the Western Conference. Steph Curry has been carrying this team lately but had a poor shooting performance against the Heat on Monday night. He was 3-17 from the field and 1-10 from three-point range to finish with nine points.

The Warriors are also close to Klay Thompson making his return to the lineup. He has not played an NBA game since the 2019 NBA finals against Toronto after tearing his ACL. He was expected back for 2020 but then ruptured his Achilles tendon while working out prior to the start of the season. The team says he could be available to play on Sunday vs. the Cavaliers.

The Dallas Mavericks are still five games behind the Memphis Grizzlies in the Southwest Division standings. This follows their three straight wins, although Memphis won their sixth straight game over the Cavaliers on Tuesday night.

On Monday night, Luka Doncic had 21 points and 15 assists in the Mavs’ victory. He also had eight rebounds, coming close to a triple-double in only 34 minutes on the floor.

The Warriors should have no problem getting their third straight win in this matchup over the surging Mavericks. Dallas would like to get their fourth straight to keep pace with the division-leading Grizzlies but should make it an entertaining game.