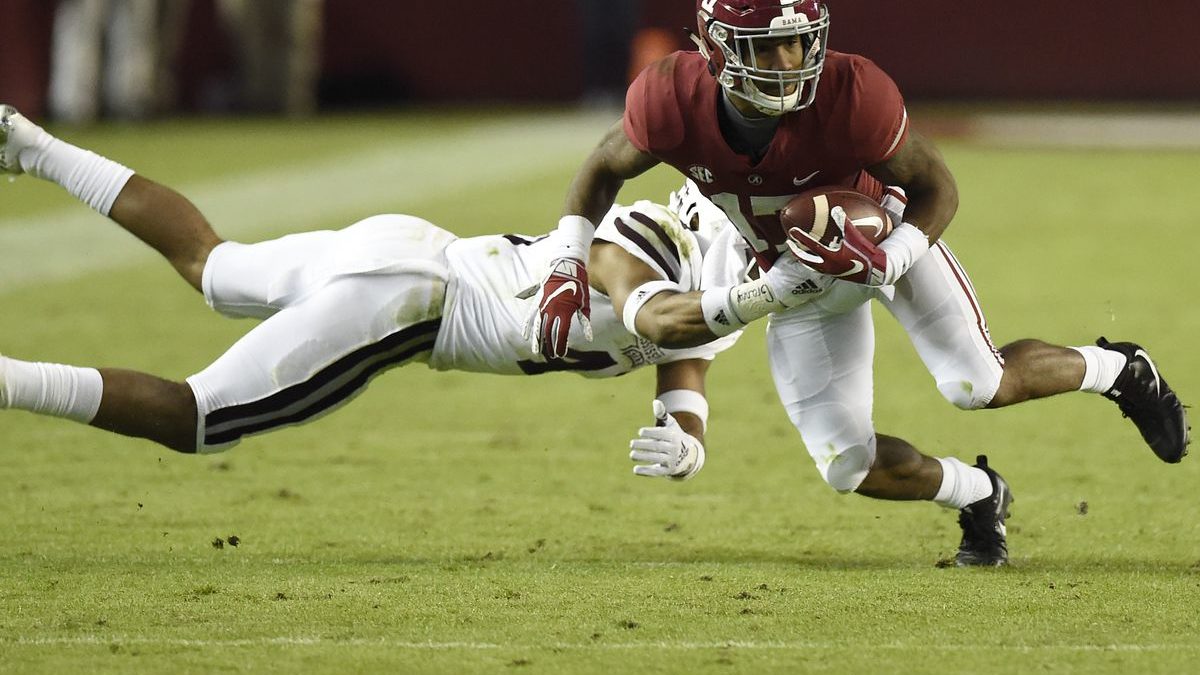 Alabama Crimson Tide Looking To Bounce Back Against A Desperate Mississippi State Team.

Diving into the college football picks this week; there is a marquee game as the Alabama Crimson Tide are 17.5-point favorites against Mississippi State. The Alabama–Mississippi State football rivalry is also known as the 90 Mile Drive or the Battle for Highway 82.

This series started in 1896 when Alabama won 20-0. Alabama has won 13 straight, with Mississippi State’s last win was in 2007 (Nick Saban’s first season with the Crimson Tide).

They are fifth in the FSB, averaging 372.4 pass yards per game. Mike Leach has defeated an AP top 5 team five times in his career as a head coach, and he will be looking to keep that trend alive.

The 2021 Alabama Crimson Tide is not a finished product. Like many other teams, the Tide will improve after their upset loss against Texas A&M. Everyone has their ups and downs, and this week the Tide will have to be more focused and prepared. Everybody else will have to improve more to have a chance to catch up.

The most improvements for the Tide need to come from its offensive line, its punter, and, to a small degree, in its secondary. Except for the punting, the other areas are good. Everywhere else, Saban’s team is elite-level solid. The linebacker, running back, tight end, and cornerback groups are filled with outstanding players. The defensive line is deep and capable.

The wide receivers, as a group, are less than those of recent Saban teams. That is to say, the Tide might not have a Heisman winner in this lineup yet, but they are good and will become very good as long as they learn from their mistakes and keep focused so the Tide can soon roll again.

“Will Rogers has played really, really well for them,” Alabama coach Nick Saban said. “He’s very accurate with the ball; he understands the offense, he’s been very, very consistent in the way he’s played throughout the season.” With Rogers running the offense, the Bulldogs and Mike Leach’s air-raid style tally plenty of passing yards.

Mississippi State ranks No. 5 in the country in passing yards per game.

Going up against a talented Tide team mixing up your game plan with a run attack might be the special ingredient the Bulldogs need to get the win on Saturday. Improvements on special teams have been made, and this Bulldog team is ready to show what they are capable of.

With the exception of the number in the loss column, not much has changed for Alabama. Playing as at least a two-touchdown favorite in every game, the Tide hit the board, laying 17.5-points. The number was wagered down slightly to Bama -17.

Playing against whopping spreads, the Tide is 3-3 ATS this year. Favored by at least 14 points in each of their last 12 regular-season games, Bama is 9-3 ATS. Bama has won 13 straight in the series and is 3-0 ATS in the last three, outscoring MSU 103-7 with the UNDER cashing each time.

The Bulldogs entered last week’s bye following a big 26-22 upset of Texas AM, breaking a two-game SU and ATS losing streak. They dropped games to Memphis and LSU by a total of five points.

History isn’t on their side; however, Mississippi State hasn’t beaten Bama since 2007, which was their second win in the last 20 meetings.

It would be great to see Mississippi State play well and get the upset, but Bama is too good, and you can bet they’re steamed after last week’s result. Nobody rallies his troops better than Saban, and you know the Tide are going to be ready.

They may take some shots, but they’ll step up defensively to get the cover. And they might not hit the total on their own due to a possible run game. Sometimes, when you have two high-powered offenses, both teams expect it, so they may slow it down with more of a run game to throw off their opponents.