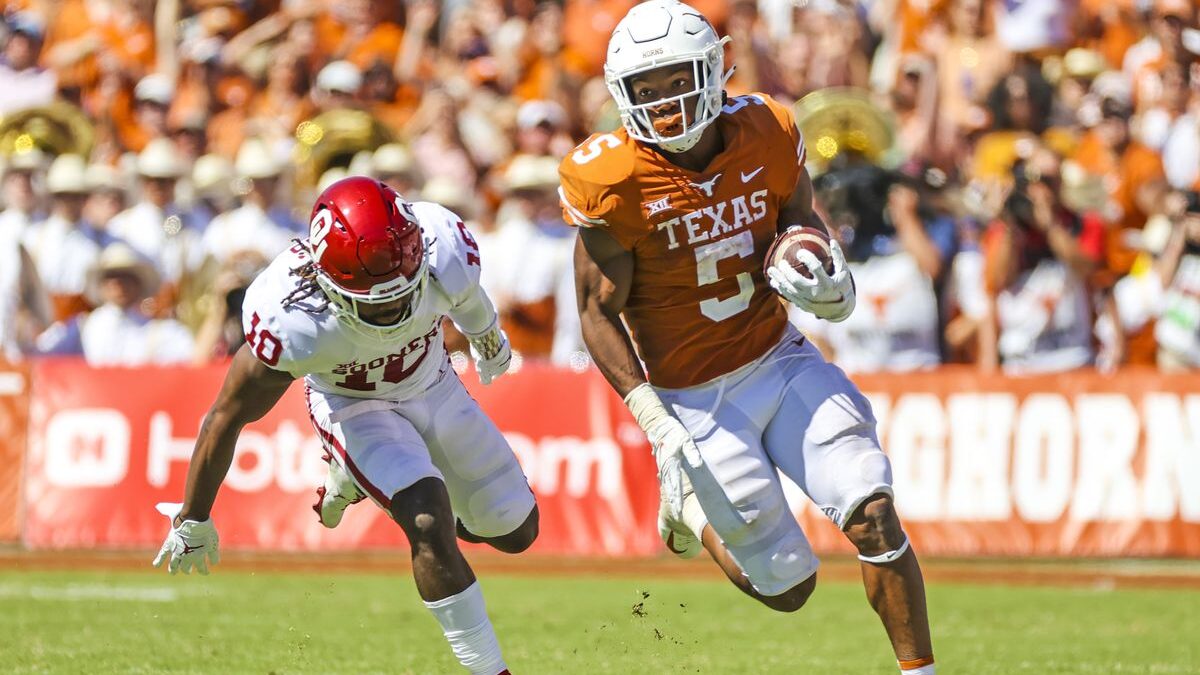 The Texas Longhorns have had a decent start to the 2022 NCAA season. However, after five weeks, the Longhorns are standing with a 3-2 record and are 1-1 in the conference.

That has left the Longhorns sixth in the Big 12 Conference behind rivals such as Kansas, TCU, Oklahoma State, and Baylor. Now, the Longhorns are all set to face the Oklahoma Sooners at the Cotton Bowl this Saturday morning.

As for the Sooners, numbers are lower than the team had wished for after five weeks. Oklahoma is also standing with a 3-2 record. Yet, the two defeats the Sooners have were conference matchups.

That has put them two steps behind the Longhorns with no conference wins. So, coming back to victory this weekend will be vital for the Sooners to keep climbing.

The Longhorns have remained somewhat inconsistent. For Texas, each week has represented a different outcome week after week. Now, the Longhorns are looking to rise to the top with a win against Oklahoma.

They need a victory like the ones they pulled against Monroe, UTSA, and West Virginia to do so. Last week, the Longhorns got a solid win against West Virginia in a game that finished 38-20 in favor of Texas.

Now, it’s time to trust top players like Hudson Card and Bijan Robinson. Card is currently leading the Longhorns with 923 passing yards and six touchdowns, while Robinson is now standing with 515 rushing yards and eight touchdowns.

The Sooners may still have a rally behind them. Yet, the season has enough time to keep climbing to the top. The Sooners had a solid start to the 2022 season yet have dropped the ball since Week 4.

This implies that Oklahoma opened the season with three wins against UTEP, Kent State, and Nebraska. Yet, against Kansas State, the Sooners could not prevent a 41-34 defeat, followed by a 55-24 loss against TCU.

For the Sooners, QB Dillon Gabriel has become a vital player in the offense. Gabriel is now standing with 1,215 passing yards and 11 touchdown passes, while Eric Gray has 460 rushing yards and three touchdowns.

The Longhorns and the Sooners are looking to climb up the division standings.

The Longhorns are now looking to break away from their 1-1 conference record.

Texas is 46th in the country with 263 passing yards and 47th with 36.8 points per game. But, against the Sooners, that might prove more than sufficient.

The Sooners are 14th with 220.8 rushing yards and 44th with 37 points per contest. So Oklahoma might have odds against them, but they can still surprise Texas with a solid win in this matchup.