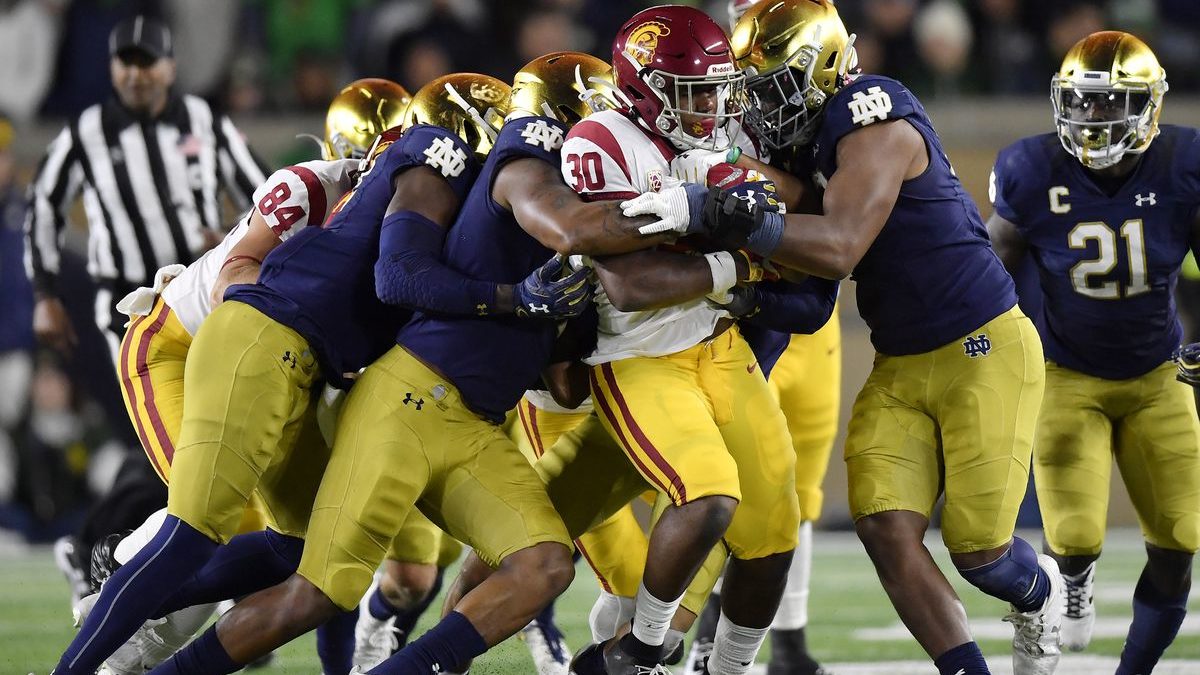 College Football has arrived with the rival series in a match between the USC Trojans and the Notre Dame Fighting Irish. This will be a battle full of uncertainties and likely a very even game.

The Trojans are visiting the Fighting Irish at the Notre Dame Stadium for a classic rivalry game. Even though they have very different records this season, they share the same feeling of uncertainty regarding their performance.

In September, the Trojans announced the official removal of their former head coach Clay Helton who exited the team with a 46-24 record. Afterward, Donte Williams was selected to continue to become the first black head coach in school history.

The Fighting Irish are coming to this game of a win against Virginia Tech with a small three-point difference. This and other factors confirm that even when they are able to win games, they are still having a hard time on offense. While their defense has been shining the most with a total percentage of 17.8 on allowed first downs this season, the defensive group is key for them to find success.

The USC-Notre Dame rivalry dates back to 1926, and since then, it has been called the greatest intersectional rivalry in college football history. For this series, the Fighting Irish had taken the majority of wins with an all-time record of 47-36-5; however, all numbers aside, every season is different, and the Trojans come with everything they have to survive and move forward this year.

Ranking number four currently in the Pac-12 South, the Trojans have an even record of 3-3 this season, led by QB Kedon Slovis who has accumulated 1519 yards so far with the help of top offensive players Keaontay Ingram for rushing and Drake London on the receiving end.

This group of players, along with very strong protection, is considered far superior compared to the Fighting Irish offense. Still, they have a big challenge facing one of the top defenses in the tournament that has been key for ND to achieve victory in most games.

“Defense is the best offense,” said most experts at certain times, and they could not be any more right about a statement, or at least in the ND football system. The Fighting Irish have managed to come to this rivalry with big confidence and a record of 5-1 so far this season, making a display of the defensive football and showing up on the scoreboard when it counts.

With a total of 58 tackles from one of the defensive figures JD Bertrand, followed by Kyle Hamilton, who has 32, the Fighting Irish has been able to overcome in games on this side of the field.

The team has also been able to average 2.3 turnovers per game due to this powerhouse group of defensive players. This strategy appears to be working so far for ND, and they plan to continue doing what they know best, hit and not get hit.

According to history and most applied to this game, ND is the favorite giving away a complete drive for TD against the Trojans team that has not been able to find themselves yet this season and directed by a new recently named head coach, the team is still in a different process to show up as competitive to give the Fighting Irish enough trouble on this game, even when they have a very noticeable offensive they will fall under the large defensive game from ND.

The Fighting Irish will add another win to this rivalry and will continue to stop the offensive game that the Trojans will bring to the game.

Nonetheless, this will be a very close game since both teams are somehow struggling in different ways and will try to work out some improvements to carry on this season.
Godds Pick/Prediction: Trojans for the spread plus the points, Notre Dame to win the game regardless, and the total stays under.