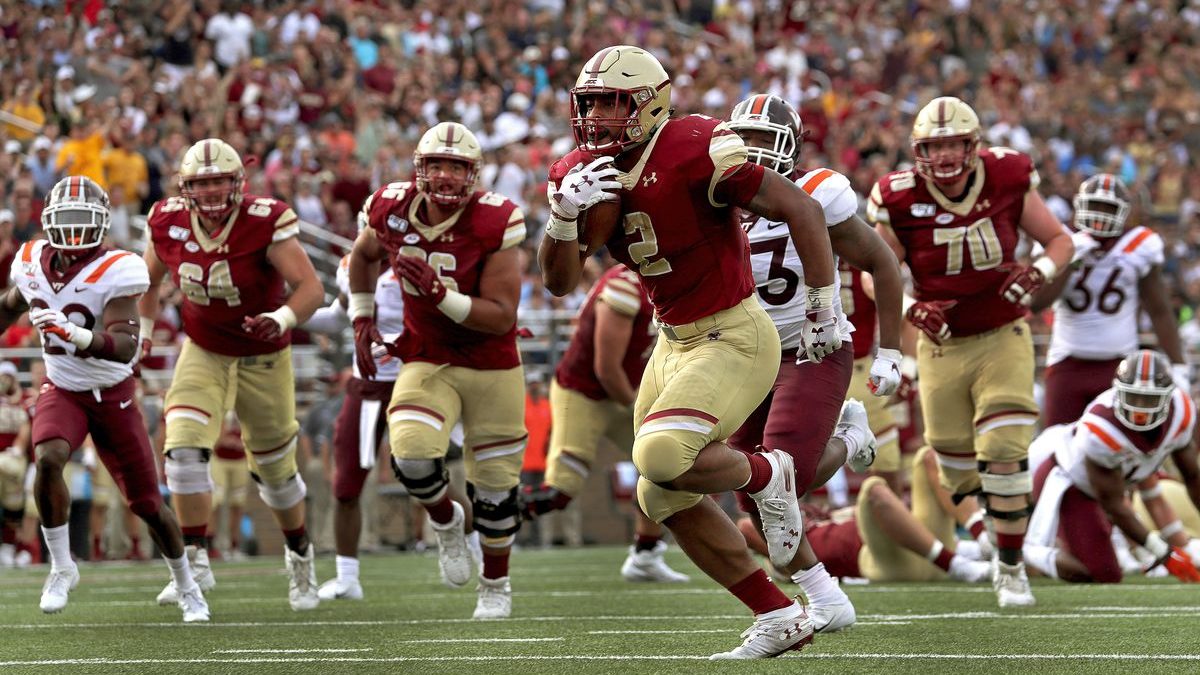 The upcoming schedule for the Hokies is set, and they now play on the road against the BC Eagles. This matchup is a must-win for each team to continue to look for a higher spot in their corresponding divisions.

The Hokies are currently third in the ACC Coastal and are coming off a relief win against the Georgia Tech Yellow Jackets in a game that ended 26-17.

The Eagles, on the other side, are last in the ACC Atlantic with the number-7 spot and also have been suffering from a four-game losing streak. They will surely come to this game desperately motivated to get the win to finally catch a break from their current season run.

The Hokies are in the lead in this NCAAF rivalry with a record of 19-10. They grabbed the win in their most recent meeting on October 17 of last year, with a score of 40-14, in a game that was mostly dominated by the Hokies ground game for 164 yards and three rushing touchdowns.

Virginia Tech Hokies Rule the Board

The Hokies are looking to extend their comeback and surprise the Eagles when they meet them on Friday. This team is currently averaging 189.4 passing yards and 161 yards when running the ball.

The offense is behind QB Braxton Burmeister, who has already accumulated 1,495 yards moving the ball forward, and a completion rate of 54.3%. His performance against the Eagles has been stellar, as well. In the last ten games between these two, on average, there is an advantage for the Hokies in passing completions, with a difference of 12.55% more.

Upcoming rising star WR Tre Turner is the leader on his team in receiving yards with a total of 602 this season. He was also the player of the game against Georgia Tech when he caught seven passes and gave his team 187 yards, including a game-winning touchdown.

The key for the Hokies is to throw the ball accurately and use their passing advantage to get the W.

Boston College Eagles on the Hunt

The Eagles have an obligation with their fans in this game and the rest of the season. They have been going on a roller-coaster ride of emotions and are now dealing with the awful feeling of being at the bottom of their division. They can’t seem to find the answer to get the win that can become a turning point for them.

Not only has the season been nothing short of a disaster, but the return of their QB Phil Jurkovec is not looking good for this season. This has been probably the biggest injury the Eagles have had, and, since his exit, the team has been trying out for a replacement that is still not clear for coach Jeff Hafley.

The Eagles have only mustered an average of 10 points in four conference games and are picking up less than 300 average yards. That performance keeps them off the list of the top 125 teams in college football.

With both teams combined averaging 49.4 points, this matchup might have everything for the total to go over.

The Hokies total has gone under in six of their last eight games, while the Eagles also tend to go under – four of their last five games have gone that way.

For the majority of this matchup, the total has also remained under for both teams. While the Hokies have the advantage in the series, they are also downplaying as a visitor against the Eagles, with a record of 2-8.

The Hokies will continue to use the momentum they recently got on their last win to put down a very downed Eagles that are struggling to find the win and have major issues in their rotation that will end up hurting for the rest of the regular season.
Godds Pick/Prediction: Virginia Tech Hokies to win and cover, and the total goes over.