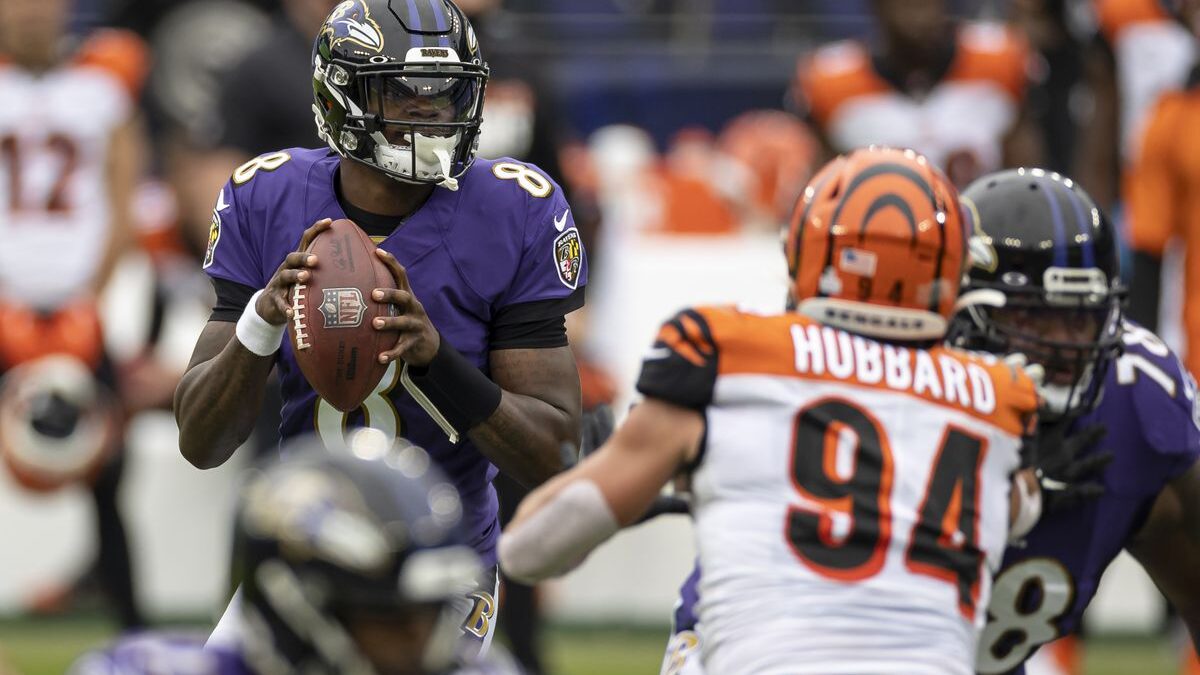 The Cincinnati Bengals go to Baltimore to face the Ravens in an AFC North clash. Both look to break a three-way tie for first place in the division.

The Bengals and Ravens both look to take over first place in the division standings with a win on Sunday Night Football. Cincinnati hopes for its third straight win after starting the season with losses against the Pittsburgh Steelers and Dallas Cowboys. The Bengals dominated the Ravens last season, beating them 41-17 on the road in their first matchup.

Baltimore started the season 2-1 with wins over the Jets and Patriots on the road but lost their second game at home last weekend as they let the Buffalo Bills come back in the second half and beat them 23-20. It was the second big lead they’ve blown this year, as they let Miami score 21 straight points to come from behind and take a 42-38 win in Week 2.

Cincinnati is hoping for a result similar to the last time these two teams met when Joe Burrow threw for 525 yards. Their offense is ranked 16th in the league this season, averaging 346.8 yards per game.

RB Joe Mixon hasn’t performed well either, rushing for just 224 yards in the first four games. The team averages just 3.1 yards per carry, which is near the bottom of the league stats.

Burrow is eighth in the league with 1,099 yards passing and eight touchdowns with four interceptions. Tee Higgins is his favorite target on offense through the air, with 20 receptions for 315 yards, which is 12th in the league.

He’s also averaging 15.8 yards per reception, ranking him 16th. However, Higgins is questionable for tonight’s game with a sprained ankle.

The Ravens are looking for their first win against Cincinnati since Week 17 of the 2020-21 season. They’ve also lost their last five games at home going back to last year, and their defense is one of the worst in the league so far this season.

This team would be at 4-0 this year if they hadn’t twice blown big leads of at least 17 points on their home field. However, they’re still the favorites to win the AFC North.

Lamar Jackson has been the complete offense for the Ravens. He’s thrown for 893 yards and 11 touchdowns this season with four interceptions.

He’s also the leading rusher on the Ravens with 224 yards on 37 carries, with two touchdowns. TE Mark Andrews has been his favorite receiver, with 24 receptions for 260 yards and three touchdowns to lead the team.

Cincinnati has been much better on defense than the Ravens this season, and they’ve covered the spread in ten of their last 12 games.

However, Baltimore hasn’t been playing with much confidence so far, as Jackson showed when he was intercepted in the end zone before their home loss to Buffalo last week.

They’ll also be facing a Bengals defense that’s only given up one touchdown since Week 2.

Godds Pick/Prediction: The Bengals win, and the total stays under.