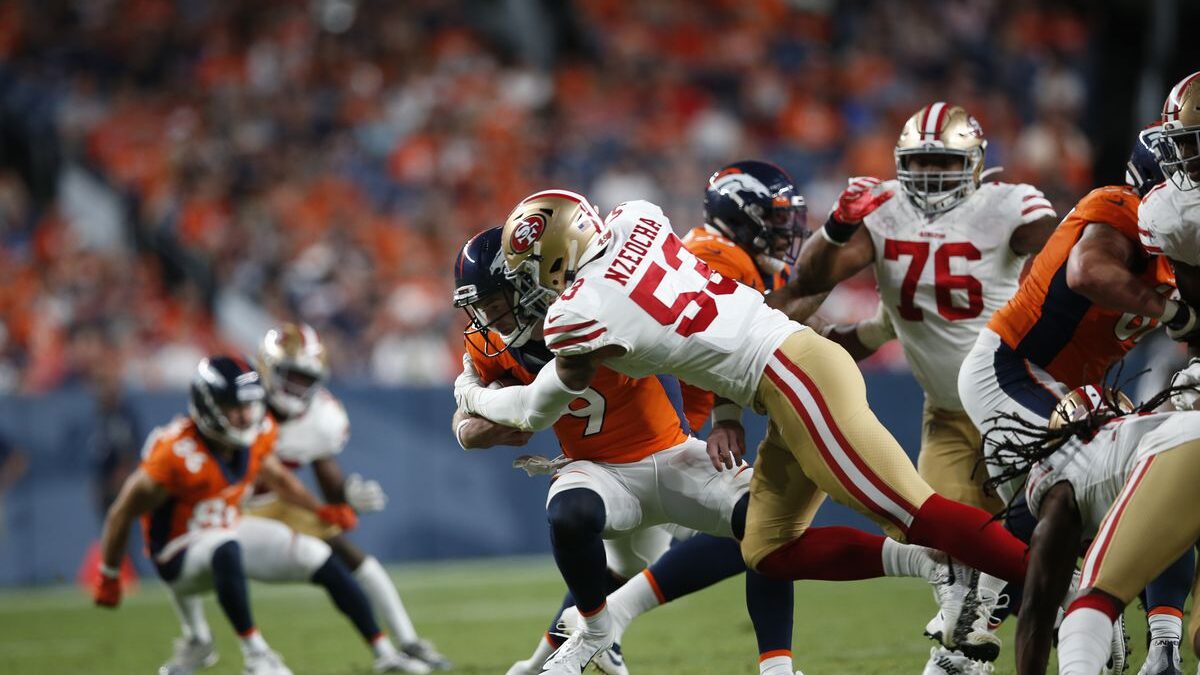 The 49ers and Broncos are featured tonight, on Sunday Night Football. Both are looking to take over the top of their divisions and get their second win.

The 49ers and Broncos meet tonight at Empower Field in Denver, as both teams had a disappointing start to the season in their first game but are trying to get their second straight win in Week 3.

San Francisco comes into tonight’s game after an impressive 27-7 win over the Seattle Seahawks in their home opener. However, starting QB Trey Lance suffered a season-ending ankle injury in the process.

The Broncos got their first season win over the Houston Texans last week, 19-9 but lost a few key players to injury. WR Jerry Jeudy is questionable for tonight’s game, and CB Darius Phillips will be out with a pulled hamstring. Denver is second in the AFC West and will have its first conference matchup next week in Las Vegas.

San Francisco should be considered lucky they couldn’t trade Jimmy Garoppolo in the offseason. With the loss of Trey Lance for the season, he’s now back at the helm with the task of leading this team. In his last two healthy seasons as the starter, the Niners have played in two NFC Championships and a Super Bowl.

Garoppolo threw for 154 yards and a touchdown after entering last week’s game and looked solid. The team hopes to continue their potent rushing attack in tonight’s matchup and is fourth in the league, averaging 182.5 yards per game. However, with Jimmy G. back as the starter, expect to see them go more to the air in tonight’s matchup.

The Broncos will be dealing with several injuries as tonight’s matchup approaches, but they have also been terrible in the red zone and average just 16 points per game, which is 24th in the league.

They have shown that they can move the ball consistently but have yet to score a touchdown when they get inside the 20.

Denver’s defense has played well so far, but they’ll be shorthanded tonight in the secondary without Phillips. CB Patrick Surtain and LB Josey Jewell are also listed as questionable with injuries before tonight’s game.

The Broncos have only allowed 165.5 yards through the air in the first two games and hope their best pass defender will be available at game time.

The Niners’ defense will play great tonight but will be shorthanded in the secondary if Surtain remains on the bench. Garoppolo should be able to make enough plays to his receivers to get the job done through the air tonight.

The Broncos won’t have an easy time against one of the league’s top defenses and will still struggle in the red zone against San Francisco.

Godds Pick/Prediction: The Niners win, and the total stays under.