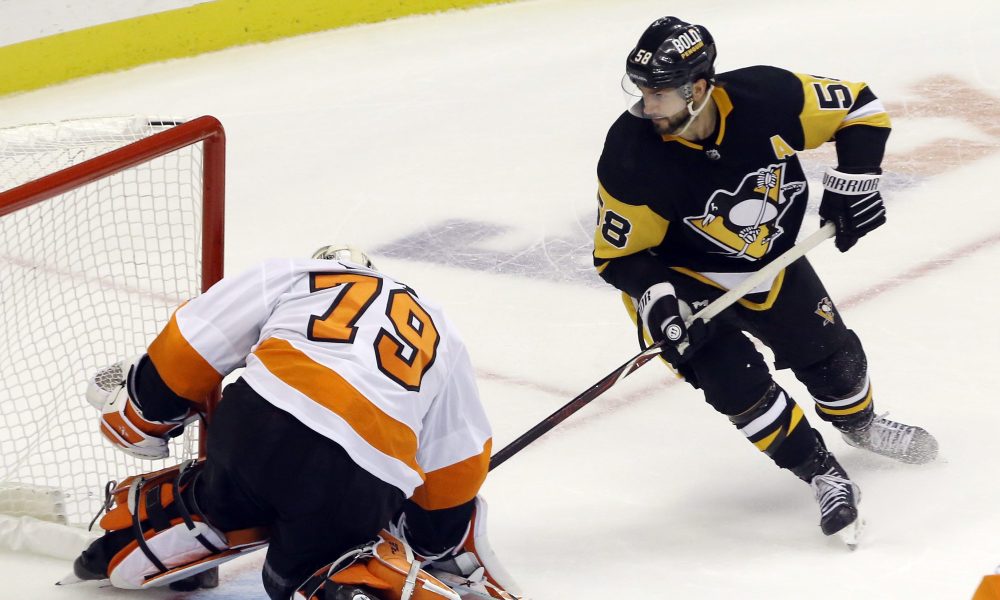 The Pittsburgh Penguins and Philadelphia Flyers will drop the puck on Thursday night in a Metropolitan Division matchup. The Penguins are currently the hottest team in the NHL, winning their last nine games in a row but still find themselves five points behind the division-leading New York Rangers and Washington Capitals, tied with 48 points apiece.

The Flyers, on the other hand, have lost three straight since beating the Seattle Kraken 3-2 on December 29. They sit eleven points behind the Penguins in fifth place in the division. Both teams have had games postponed because of coronavirus concerns, with the Penguins having five games rescheduled before beating the San Jose Sharks on Sunday, 8-5.

Penguins Try to Gain Ground in the Division

The Penguins are currently seven points out of first place in the Metropolitan Division but have recently been playing their best hockey this season. Before having five games postponed, they ran off seven straight wins, only giving up 11 goals during that stretch.

Jake Guentzel leads the team in scoring with 31 points on 16 goals and 15 assists. Kris Letang leads them in assists with 23 and plus/minus where he is +10.

The Penguins also lead the league in penalty killing, with 90% of the opponent’s power-plays being unsuccessful. Even with the recent win streak, they’ve had a tough time making up ground on the division leaders, who have also been playing great hockey lately.

Flyers Hope to Turn Around a Disappointing Season

The Philadelphia Flyers have lost three straight games but are 5-4 in their last nine games overall. After getting three wins in a row back in mid-December, the Flyers proceeded to lose ten straight games, which saw them dive straight towards the bottom of the division, and the team has never recovered.

They’re currently in fifth place in the division, sixteen points behind the leaders. Claude Giroux leads the Flyers in scoring with 29 points, and Cam Atkinson has 13 goals and is +14 in plus/minus. Both are current leads for the team. Philadelphia must find a way to win at home with a 6-6-2 record and snap the Pens’ winning streak.

Pittsburgh should be able to get the win in this game as long as they continue to be consistent on the defensive end, where they have been playing solid during the win streak. However, the Flyers need to start putting together better performances if they want to climb in the division standings.