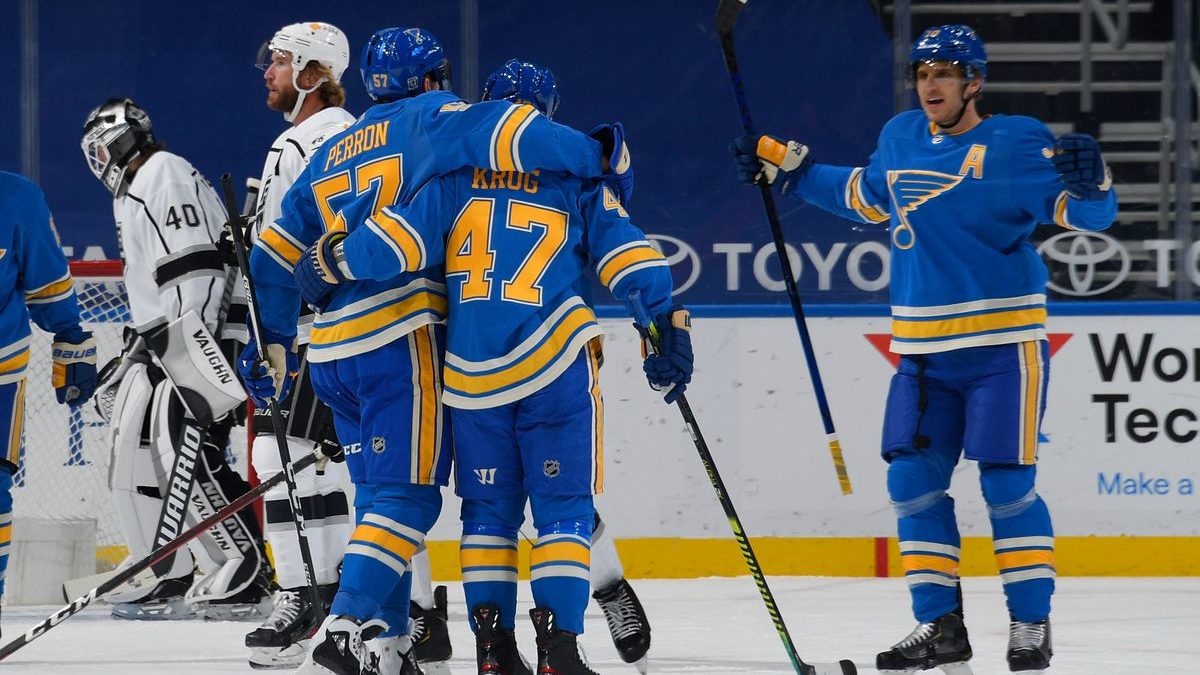 The Kings will try to clean up their special team’s play when they visit the St. Louis Blues following a couple of losses to them in October. In one of their last duels, the Kings allowed four power-play goals and a short-handed goal in falling 7-3 in the first of the back-to-back games.

The reality of the Blues, on the other hand, is different. Their start to the season was absolutely devastating, managing to string together four consecutive victories.

The Blues are winning with balanced scoring. They have used 20 skaters this season, and each has registered at least one point, with Jordan Kyrou (two goals, six assists) and David Perron (five goals, two assists) leading the way.

St. Louis Blues want to continue dominion over the kingdom of Los Angeles

The Blues have been getting important pieces back, such as winger Pavel Buchnevich after his two-game NHL suspension for a head injury and winger Brandon Saad, who was absent due to COVID-19 protocols in the opening weeks of the championship.

In spite of the absences, the Blues are still averaging 4.14 goals per game. In their last game, though, they only scored one goal out of 37 attempts. That came off the stick of Torey Krug, while Vladimir Tarasenko and David Perron each added an assist.

Fortunately, St. Louis has been able to be more consistent on defense. The team has only given up 2.14 goals per game and didn’t allow the puck to enter the net once in their last game. The Blues will need to keep that up tonight if they plan on skating their way to victory.

One of the losses to take into account in gauging the Kings’ performance this season was a 3-2 overtime loss in Dallas. The Kings are a step behind the well-rested Blues; however, they have won their last two following six straight losses.

The Kings are averaging 2.44 goals per game and found the net three times in 33 tries in their most recent win. Anze Kopitar picked up a goal and an assist, while Alex Iafallo and Carl Grundstrom each added another. Tobias Bjornfot and Adrian Kempe helped, as well, adding two assists.

On defense, the Kings are fairly consistent but lost a little ground in their most recent game. They have only given up an average of 2.67 goals a game but gave up two in that win. It’s time to tighten up the laces on the skates if they don’t want to drop another game tonight.

Trends between the two showed mixed results for sports bettors. The Blues have seen an over in seven of their last ten games and are 6-1 straight up (SU) in their most recent seven matches. They’re also 4-2 SU in their last six against the Kings.

For their part, the Kings have seen the under hit in six of their last eight and are 3-11 SU in their last 14 games. The total has gone under in six of the most recent eight times that these two have met.

The betting odds put the Blues as favorites, who, in addition to having a favorable record against the Kings, have a mental advantage in terms of the performance they have been sustaining this season. The Blues have two shutouts in three games and have converted 35% of their power plays. The Kings can’t find consistency, despite having talent, and their run of bad luck will continue tonight.